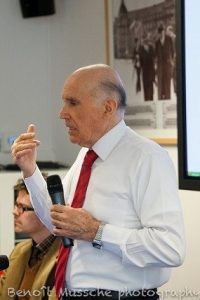 Dr. Kamel Mohanna intervention within ceremony in 17th of December 2016 *President of Amel Association and the general coordinator of the Lebanese NGO’s network

Firstly, allow me to dedicate great thanks and respect to the Ghazal foundation for education, research and peace in our Lebanon, and its contributions to protect and promote social peace, dialogue and education in our communities in collaboration with fondation du france. Furthermore, the Ghazal foundation is encouraging civil society and social actors to achieve greater accomplishments and promote more peaceful approaches around the country by awarding an annual prize which, this year, has been awarded to AMEL.

Let us also take this occasion to thank the prize committee, Mr. Michael Ghazal, Dr. George Corm, Mr. George Ghanem, Mr. Pierre Issa, and Mrs. Angelina Abo Rgelieh, in addition to all local and international authorities who supported AMEL throughout its journey, especially within Amel’s nomination for the Nobel Peace Prize 2016.
AMEL, in the midst of this delightful occasion and happy event, would like to assure you that it shall continue its work to build social peace and to ensure human dignity, and we will never stop, no matter how big the obstacles are! Any prize AMEL wins will be totally dedicated to empower and support vulnerable and marginalized groups in order to give them a voice and to defend their causes in international platforms.
AMEL constantly campaigns to promote international recognition, appreciation, and support for Lebanon’s great role within the refugee crisis response, which Lebanon is burdening without any considerable help from the international community.
World peace is a complex concept, especially from the perspective of the Arab world; but real, social peace is possible and it is something that Amel has promoted for 37 years between Lebanese communities, because we believe that it the essential key for development. Amel won the trust of local communities, by promoting peace, whilst through Lebanese history, others promoted war.

During four decades, AMEL, the non-sectarian NGO, carefully launches its projects and missions based on the needs of the communities, designing them to encourage processes of development and social peace in Lebanon. Through understanding and collaboration with local communities from different sects and cultures, AMEL succeeds to build the first step to social change, with its progressive nonsectarian model. The organisation maintains the motto “positive thinking and permanent optimism”, whilst implementing its wide range of projects, all taking a sustainable, developmental approach, based on the 3 Ps of AMEL: Principles defining a Position that we put into Practice.
If I had to summarise AMEL’s philosophy, I would say: “our mission is to protect each person’s dignity and develop each person’s humanity regardless of their confessions, political ideology, social economic level or nationality”.
AMEL, led by an enthusiastic, dedicated, and committed team of 800 workers and volunteers coming from different places around Lebanon as well as from the international community, works hard on a daily basis across 24 centers and 6 mobile clinics, to provide quality services and solidarity to beneficiaries from vulnerable and marginalized areas from host communities and refugees (Syrians, Iraqi, Palestinians, Sudanese, etc..). 1.5 million services in different sectors have been provided to refuges during the past 4 years while 8 million services have been dedicated to Lebanese people during the past 30 years of AMEL’s journey.

We are all aware that Lebanon is known for the huge disparities between urban and rural areas, and it is for this reason, Amel has centres located in underprivileged, rural areas providing a number of services, notably health services. We offer full health care programs (general medicine, radiology, gynecology, dentists, cardiology, laboratory analysis and physiotherapy) that cover both treatment and prevention at a lower cost than the private sector, and this is exactly how we have gained the confidence of the population and is what has allowed us to initiate development projects with the active participation of the beneficiaries.

In AMEL we believe that social change is not a ready plan we apply to societies, thus we have never believed or even tried to implement a ready model -taken from western societies, for example, – on Lebanon. Every society requires a different structure and well thought out tools to address its problems and its needs. During its long experience, AMEL has accumulated expertise regarding the Lebanese context, of social crises and conflict, and has therefore been able to configure an operational idea about the social fabric of developing bridges with refugee communities, Syrians and Iraqis ..etc. Amel influences actors to connect and integrate these communities with host communities, through the promotion of a culture of citizenship and civil rights. Amel as a “human values” association has always taken part in promoting Human Rights in Lebanon as well as globally; it works by promoting civil rights, especially for children and youth in order to enhance their knowledge for fundamental rights and their capacity to engage in the civic society.

Thus, our centers are spread through marginalized areas, especially in the south region that has suffered and continues to suffer from policies of denial, and threats from Israeli attacks, a danger which still exists. The political and security situation in Lebanon now, could turn explosive at any moment. Lebanon and the rest of the region remains hostage to a catastrophe unless a just solution to the Palestinian issue, the central issue in the Arab world, is found.

Finally, allow me to renew our thanks and gratitude to the Foundation Ghazal and the University of Saint Joseph, these two great academies, and to thank all those who joined us in this great celebration. We promise the Lebanese and all those residing in Lebanon, to continue our mission in all circumstances, and to persevere and fight until we gain the international recognition of the role of Lebanon. We will continue to work towards building a fair, democratic civil state, and we will remain courageous defenders of just causes and individual’s human rights.